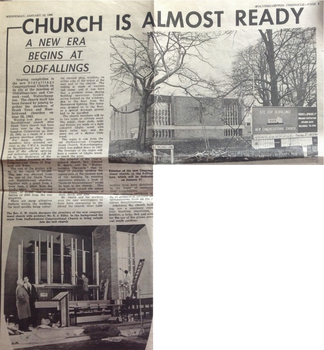 The joining up of members from Heath Town and Masefield Road Churches on 23rd June 1963 formed Oldfallings United Reformed Church.

​However the history of Heath Town Congregational Church has to taken into consideration as in 1837 Lay Preachers at Queen Street were moved to Heath Town for the spiritual good of the residents. Rev J Roaf started preaching outdoors to little effect, shortly afterwards the Rev. Henry Rogers; Pastor of the Temple Street Church established a meetinghouse in the house of Mr. Parkes.  A shop in Grove Street was taken where Rev. Rogers started preaching every Sunday afternoon with Lay Preachers in the evening. In 1839 a Chapel was built in Chapel Street and in 1861 the present School was built in Chapel Street followed by the building of a new church in 1886.

Masefield Road Congregational Church was opened September 1940, the Rev. John Williams, M.A., the former Minister of Queen Street Church, and Alderman Baldwin Bantock played an important part in the formation of the church. The first minister was the Rev. Sylvester Davies, M.A., who was followed by in February 1943 by the Rev. H.S Light who during his 9 years of Ministership built up a strong Church and Sunday school. The Y.W.C.A building in Masefield Road was used for worship and other activities for a number of years before moving to the current church.

A few people in 1957 joined the church due to the closure of Stafford Street Congregational Church.