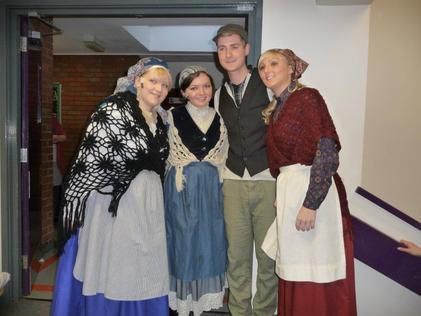 
Oldfallings Players celebrated its 30th birthday last year. Approximately 35 years ago, I set up Oldfallings Junior Choir for a group of 8 – 12 year olds. We did a variety of concerts and entertained at local residential homes for the elderly etc. However, as the members of the group got to their ‘teens’, they were more reluctant to be known as ‘juniors’! Thus Oldfallings Players was born.
We performed ‘The Wizard of Oz’ in 1982, in the church hall, the company being supplemented by mothers, fathers, aunties, uncles, grandparents, friends – in fact, anyone we could physically drag in! Members of the church helped out with costumers, lighting and sound – the talent was endless. I remember that Tin-Man’s costume was made from catering tins donated from the café at the Civic Centre, and one member of the chorus standing behind, tightening the wire holding it together during the performances!
The show was a great success and we decided to carry on, spurred on by lots of interest shown by the audiences in joining the group. We made the decision at this point that the company should always have the local community at its heart – we would not have an audition policy to join – it should be open to anyone who wanted to ‘have a go’. This still maintains – anyone is welcome to come along – we still rehearse at Oldfallings Church on Fridays at 7.30pm. Rehearsals are great fun! We are also in need of non-acting members to support the shows – even making the tea and coffee for rehearsals would be a great help.
We have three main musical events each year – a ‘main show’, usually in May, and this takes place in a local theatre; we have a three day ‘Cabaret’ in September and then a Carol Concert in December – these are usually held in the church hall. Additionally, we always sing at the church Candlelight Carol Service which is the Sunday before Christmas.